The Wolf of Baghdad

The Wolf of Baghdad

Posted on December 5, 2017 by The Surreal McCoy

On the Tube home the other night, after a screening of the wonderful new documentary Remember Baghdad, I fell into conversation with one of the audience, an Iraqi lady called Dina. We were complete strangers but found ourselves talking about the film and its effect on us. She told me that she had lost her family home and had been displaced as a result, but has recently returned to Basra a few times for work.

The day after I received an email from her accompanying the photos of old Jewish houses in Basra that she had promised to send me.

I was anxious for days before, for whilst I was homesick I knew that I longed for an Iraq and a Baghdad that are no longer there.  What was I going to see ? How will people greet me, knowing I’ve been in London while they’ve endured war after war ?

I landed in Basrah and the minute I smelt the air, I know I had come home.  I felt an overwhelming sense of belonging.  Everything, from the pebbles to the weeds at the side of the road looked familiar and were welcoming me back !

Work aside, I asked the driver to take me to the old parts of Basrah. He was surprised and bemused, could not understand why I’d want to see old buildings. He finally consented, and told me he will take me to Biyoot il Yahood (The Jews’ Houses). He then started telling me how his parents and grandparents told him stories of how they all lived together in harmony, Muslims, Jews and Christians, and how they were great friends and neighbours.

It was so sad to see the state they’re at.  I’m not sure if they’re protected or not, but they are certainly not maintained or refurbished. Many have squatters in them, I’m told they’ve ruined the inside. One or two are taken over by artists and poets’ socieities who admire and understand the value, who lobby the council often to do something about the state of the houses (falls on deaf ears), and who are penniless so can’t really do much about them. They hope that by occupying them as artists they can at least prevent squatters or worse.

These photos were taken in 2011. I will go back to take more detailed photographs, and if anyone recognises a building in particular, I’d be very happy to go back and take more photos.

Walking by these faded crumbling edifices filled me with great sadness. These were homes that were filled with laughter, with the exquisite smells of cooking, with the fragrant garden plants in the evenings. These were homes filled with hope, with families, with joyful and sad occasions. How can they now stand so empty, so barren ? How the wind whistles through the gaps, how the memories float through the air, how the souls of those no longer there must roam around, wringing their hands in despair and sadness. 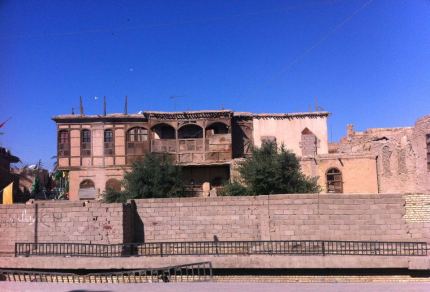 One thought on “Remembering Iraq”

Published by The Surreal McCoy

Cartoonist. As seen in the New Yorker, Sunday Times, Private Eye, Spectator and other unlikely places. Clients include Bloomsbury and Random House publishing. Illustrated Girls Are Best by Sandi Toksvig & Alex Through The Looking Glass by Alex Bellos. Featured in The Inking Woman - 250 Years of Women Cartoon and Comic Artists in Britain, published by Myriad Editions. First graphic memoir The Wolf of Baghdad to be published January 2020 by Myriad Editions. View all posts by The Surreal McCoy